Sidebar: The Rade Tank and Terry

You know how some guys have lots of working mechanical knowledge about motorcycles and can seemingly diagnose and fix anything that might go wrong? For example, during a Mexico ride a few years back one of the guys in our group had a problem with his KTM 690. In particular, the bike suddenly died as we were riding down the highway. I watched in amazement as my buddy Chuck diagnosed the problem as a spark plug cap wire issue and then proceeded to make a temporary roadside fix by making a new plug cap with some aluminum foil. That got the 690 going well enough to ride to the next large town with an auto parts store. Once there, Chuck acquired a spark plug wire for a 1960s Volkswagen Beetle and made a more permanent repair. It was awesome to watch – sort of like a real world episode of MacGyver.

Well, I’m not that guy. While I do have some mechanical aptitude and can do basic work on my motorcycle I am limited beyond that.

To further complicate things, I have to do all my work in my driveway. I always envy those with large, well-stocked and lit workshops whenever I’m standing in the doorway of my one car garage overflowing with all my wife’s excess stuff. She has so much junk in our garage that if you saw it you might wonder if we were going to be featured on an episode of Hoarders.

In any case, there just isn’t enough room for me to do any meaningful work in the garage. Anytime I need to do something to one of my bikes, you’ll find me in my driveway.

Which isn’t a totally terrible thing. Why, you ask? Because while other guys have large workshops with every tool you might imagine, I’ve got a Terry.

Terry is my adventure-riding neighbor. Whenever he sees me working on my bikes, he can’t resist coming over to visit with me. I always welcome Terry’s visits because shortly after he arrives, he starts supervising my work. Then, a few minutes later Terry takes over the job and I end up being his assistant.

When I was trying to figure out how to modify the Madstad windscreen on the 701, Terry came up with a plan, provided all the tools, and then executed the plan as I sort-of helped…Okay, I admit it, I mostly watched and provided comic relief because Terry had things well under control and didn’t really need my help.

Anyway, the instructions for the Rade tank indicated that it should only take 2-3 hours to completely install. At hour 4, I was standing in my driveway, scratching my head, wondering why the Rade tank wasn’t fitting in the tiny spot it’s designed for. Luckily Terry arrived, pointed out my installation error, corrected it, and then proceeded to complete the rest of the tank installation. Without his assistance, who knows how long it would have taken me to solve the puzzle.

Everybody should have a Terry. Especially if you have a wife who thinks your garage is a dumping ground for every “must keep” item she doesn’t want in her house.

Here’s a pic of Terry installing the shift arm on my 701. 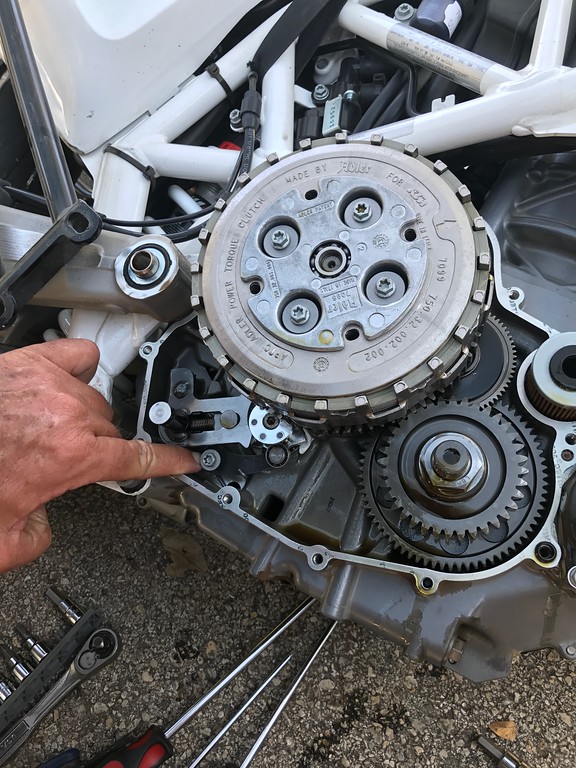 Terry, if you are reading this, I can’t thank you enough for all your assistance.

Now, back to our regularly scheduled ride report.