Our objective today was the border town of Boquillas, 235 miles away from Del Rio.

Ready to ride, we are all smiles. 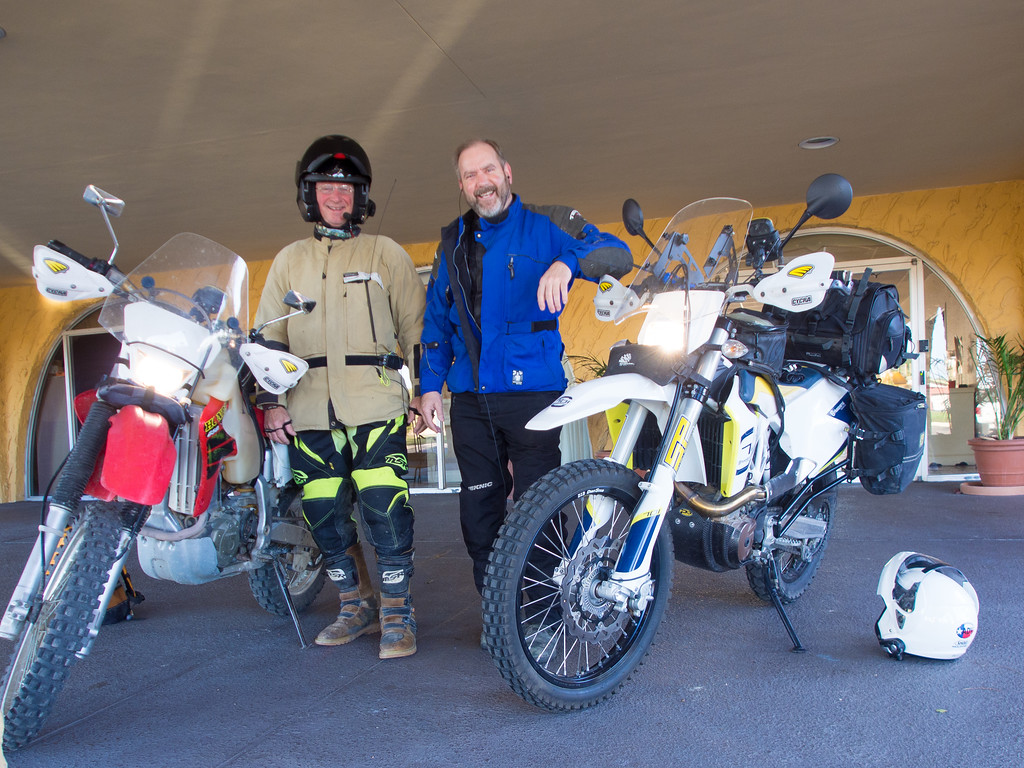 Crossing into Ciudad Acuna was a non-event. We rode across the bridge, paid our tolls, showed our papers to the guard, and were waved on our way.

As usual, navigating the surface streets through Mexican towns is challenging. Street level maps are often not reliably accurate nor do they typically indicate one way streets. Mexico loves one way streets, a fact you really need to be cognizant of when riding there.

Additionally, the cops were out in force. Not because of the drug war. Not because they wanted to fish the junkies and banish them to Legacy Healing Cherry Hill. Instead they were directing traffic all over town. Today, the third Monday in November, is Dia de la Revolution – a national public holiday celebrating the 10-year revolution that began in 1910 to oust the dictator Porfirio Diaz. Many towns have parades organized by the primary schools to celebrate the revolutionary victory. My presumption is that the cops were helping keep traffic moving while preparations for the parade were underway.

After riding around in circles only a few times, we finally managed to locate the road out of town that we were seeking and we were off, riding west.

About the drug war: The #1 topic I get asked about riding in Mexico is safety. People in the USA have heard about the terrible Mexican drug war and all the murders and can’t believe we would venture into such a dangerous environment. Yes, there is a drug war. No, I have never encountered it in the 10+ years I’ve been riding in Mexico. My personal opinion is that the very nature of journalism makes bad things seem worse and more pervasive than they really are. Similar to riding in any country, including the USA, there are simple rules of safety that I follow to minimize the risk of being caught up in a bad situation. Follow those basic travel safety guidelines and you have a very high probability of not having any problems at all.

My purpose with these comments is not to use this ride report as a bully pulpit or to spark a heated discussion of the drug war and/or the relative safety of riding in Mexico. Instead, it is one of those topics that many riders ask about so I thought to address it up front. I will leave it at this – we decided, based on our individual risk assessment of the situation and our personal experiences of riding in Mexico, that the risk was minimal and the odds of us getting caught up in a drug-war related incident extremely unlikely.

The first 25 miles or so out of town was pavement, till we reached the community of Santa Eulalia. Beyond that the road turns to dirt. This particularly community is a collection of houses and two small tiendas (stores) on the main drag through town. When I passed through here in 2007 there was only one store. Now there are two, across the street from each other, but the old one seemed to be in disarray so it may not be open anymore. Seeing that it was clearly open, we stopped at the newer store for a short break. 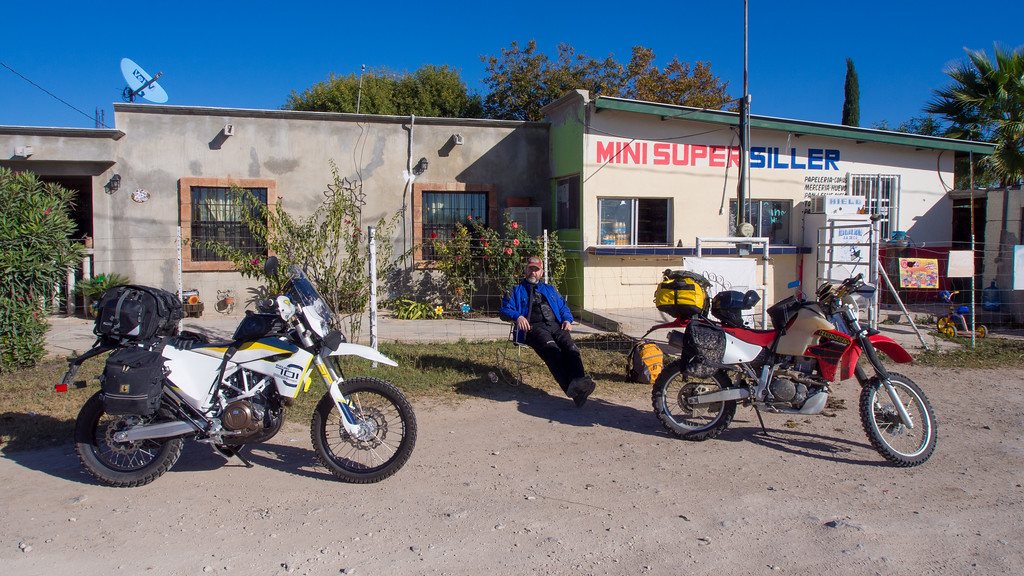 Even in Mexico you will see advertisement for a personal university of choice. This truck was parked outside the store in Santa Eulalia. Go UTSA!

After a refreshing break, we mounted up and headed west, looking forward to finally riding some dirt. Just outside of town I was surprised to see what I first thought was a guy wearing motorcycle armor standing in the middle of the road. Then I realized it was a soldier wearing combat gear standing in the middle of the road. A few guys in uniform had a truck and appeared to be manning an impromptu checkpoint of sorts. We stopped and looked at them. They looked at us. Neither party sure what to do. I believe they were a random checkpoint set up for drug interdiction (routine in Mexico) and we certainly didn’t fit the description. We were (a) gringos, (b) on motorcycles, and (c) riding west into the desert.

The soldiers figured out within about 30 seconds that we weren’t the guys they were looking for and indicated we could go about our business. I asked for permission to take a picture and my request was granted. 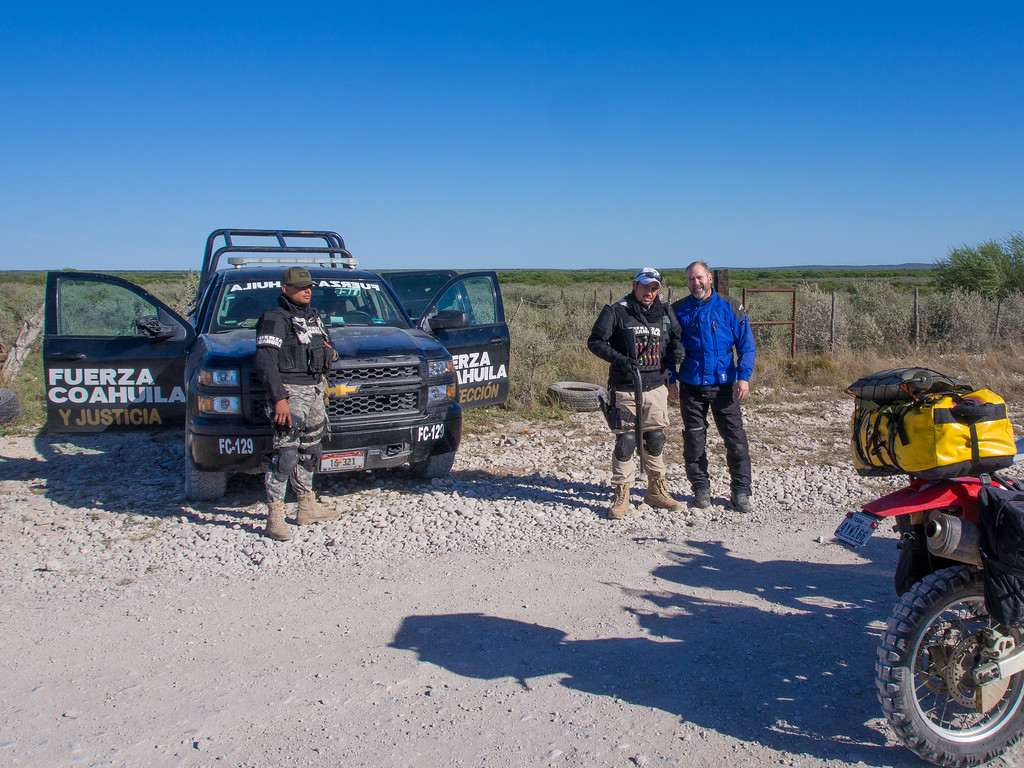